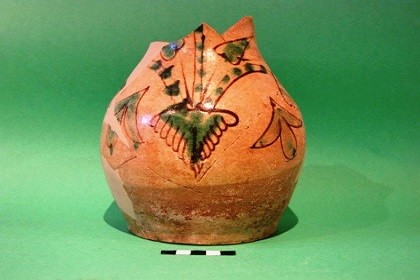 Welcomed in the halls of the castle is connected to the guided tour of the local scenes with graphite, towers and excavations. In addition to exhibits from the municipal area, there are the artefacts found in the castle and it recovered during archaeological investigations conducted by the archaeologist Marcello Rotili between 1993 and 1997.
Along with artifacts of household, clay and metal, have performed an artillery shell and coins (40 including 2 silver and 38 bronze), together with the achromatic ceramic, used to traporto of food or liquid or used for devotional functions.
There are some of the most significant productions of the Middle Ages as the painted ceramic underglaze piombifera of XIII-XIV century, the protomaiolica of XIII-XIV century and the graffiti produced between the fourteenth and fifteenth. You can see examples of glazed blue designs and numerous dishes, jugs, bottles, microvasetti, bowls, cruets and lamps of enameled white monochrome (late Middle Ages and Modern Age).
They distinguish between the plates decorated with the family crest Caracciolo (shield banded in gold and head in blue), two funds of dishes safe production Ariano respectively decorated with a bust of an angel and with female bust.