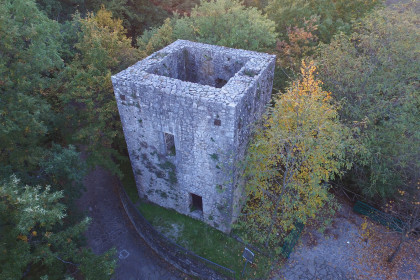 It is probably the oldest part of the town of Torella, the name comes from the German word Geirfalk, ie phaco rapacissimo, to remember the forests of territory rich in game. The first settlement was formed around the church of Sts. John and Paul, from the Byzantine period, but already in Roman times was considered a place of worship and burial. With the advent of Christianity continued this role. The first written account of its origin and its membership in the feud of Torella dates back to 1151. The territory of Girifalco was gradually abandoned, but the feudal lords of Torella continued to retain the title of nobility.
Built in the Norman period (XI-XII century), it has the typical characteristics of military to meet the monitoring requirements and to defend the territory. A quadrangular features architectural elements of perusal of the Roman period. It was placed on at least three levels: the first used as a warehouse and stables; through a wooden staircase outside, people arrived at the second floor, probably followed other two plans, one of which completely collapsed. According to research by Rotili tower also it had residential function.