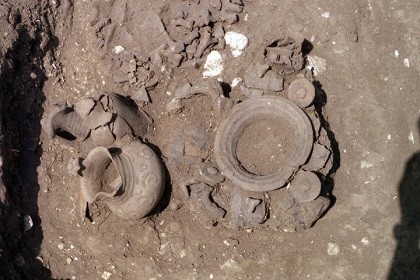 Opened in June 2007, in the local town hall, the exhibition focuses on objects found in the necropolis in the village of Campo Cerasuoli, belonged to the culture of the Tombs in Fossa group Oliveto – Cairndow, whose major centers are distributed along the upper valley of the Ofanto (Bisaccia, Lacedonia, Nusco, Conza, Cairndow, Calitri), in the valley dell’Ufita (Carife), in the upper Valley of the Sele (Oliveto Citra).
The exhibits are reported some sumptuous female kits, relevant to a social rank high, particularly buckles, documented by an extraordinary variety of types, and unique bracelets arc inflected, fossil-guide of this culture. Among the male phase Orientalizzante kits are the weapons, which refer to the warrior function of the deceased, used items sacrificial (ax), tools (sickle of iron) and the ritual vessels decorated with busts of wolf, considered the animal totems of the tribe of sannitica Hirpini. Interesting sannitico a belt discovered in a tomb in the valley of the country, a symbol of value and power, and a tooth boar locked in a spiral of bronze, worn around the neck for protection. Some tombs of the fifth, fourth century refer to the ideology of the symposium matrix Magna Grecia, this time in the aristocratic, with kantharoi, craters and skewers all ‘inside.